Echo Canyon is situated at the head of Dry Valley, one in a series of valleys along Meadow Valley Wash. Emptying into the Muddy River near Moapa in Clark County, Meadow Valley Wash eventually reaches Lake Mead near Overton. Although part of the Colorado River watershed, the park’s environment is typical of the Great Basin desert and riparian life zones. 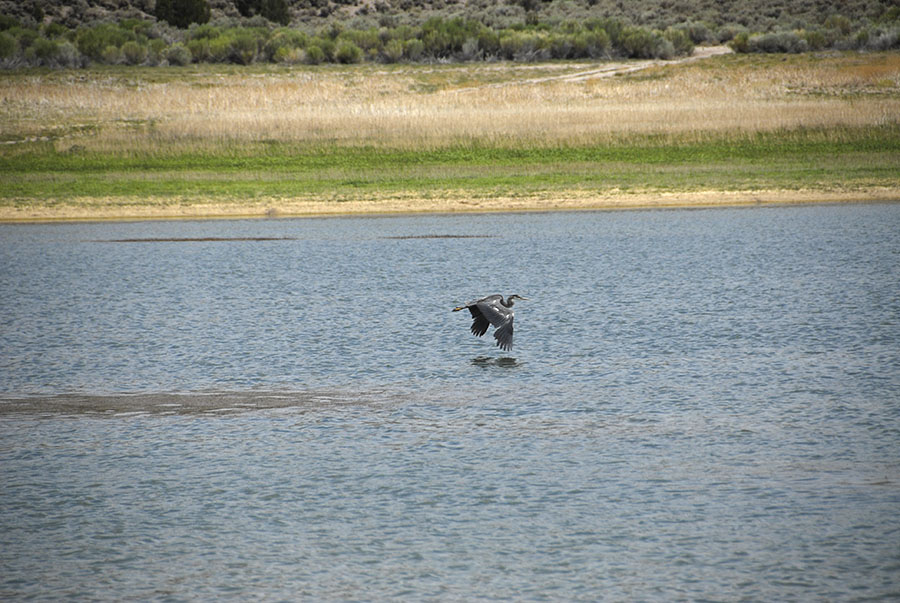 The reservoir attracts a variety of waterfowl and shore birds, including mallards, teals, herons, avocets and the infrequent, yet beautiful, trumpeter swan. Eagles, hawks, songbirds, hummingbirds, ravens, owls, roadrunners and vultures inhabit the canyons and valleys.

Common animals include squirrels, cottontails, jackrabbits, coyotes, skunks and an occasional bobcat. Deer are seen in the early morning as they come to the lake for water. Several species of lizards and snakes also inhabit the park.

Single-leaf pinyon pine and Utah juniper are the predominant native trees at the park. Ash, Russian olive and ponderosa pine have been planted for shade. Cottonwoods, willows, duckweed, watercress, cattails and other riparian plants flourish along the canyon stream. Sagebrush and rabbit brush cover the hillsides, with cactus and narrow leaf yucca also present. Wild current grows in backcountry canyons.

Volcanic activity 45 to 125 million years ago formed many of the rocky outcrops visible in the park today. The cliff walls of Echo Canyon are composed of tertiary basaltic lava flows and the badlands north of the reservoir are comprised of volcanic ash-flow tuffs. Alluvial gravel and pinkish clay formations formed later, resulting from a vast lake that covered this area about a million years ago. As it dried, veins of chalcedony, or desert rose, were exposed and are abundant in the area.

The park ranges from an elevation of 5,200 to 5,600 feet. The climate of the area allows the park to be open year-round.  Summer temperatures range from 85˚F at midday to 54˚F at night with winter temperatures ranging from about 40˚F during the day to the low teens at night. Rainfall is variable. Thunderstorms are common in the summer and snowfall is common in the winter.