The spires and buff-colored cliffs are the result of geologic processes occurring over tens of millions of years. The beauty enjoyed today had violent beginnings, starting with explosive volcanic activity that, with each eruption, deposited layers of ash hundreds of feet thick. The source of this ash, the Caliente Caldera Complex, lies to the south of Cathedral Gorge.

About five million years after the eruptions ceased, block faulting, a fracture in the bedrock that allows the two sides to move opposite each other, shaped the mountains and valleys prevalent in Nevada today. This faulting formed a depression, now known as Meadow Valley. Over time the depression filled with water creating a freshwater lake. Continual rains eroded the exposed ash and pumice left from the volcanic activity, and the streams carried the eroded sediment into the newly formed lake. 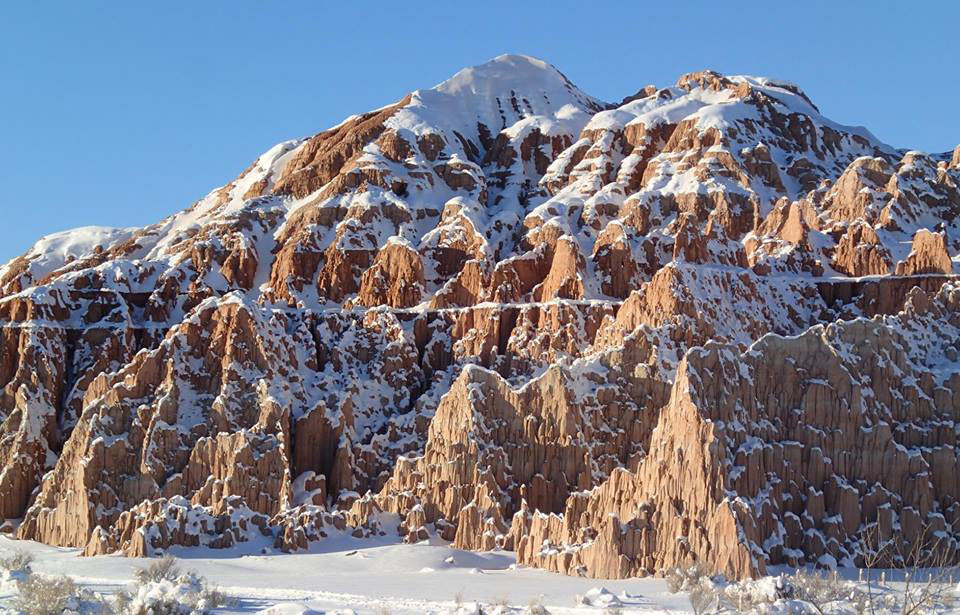 The formations, made of silt, clay and volcanic ash, are the remnants of that lake. As the landscape changed and more block faulting occurred, water drained from the lake exposing the volcanic ash sediments to the wind and rain, causing erosion of the soft material called bentonite clay. Wind and water erode rocks and soils at a rapid rate and vegetation cannot grow on the outcroppings. The vegetation-free slopes stand in stark contrast to the valley floor where primrose and Indian ricegrass hold small sand dunes in place.

In the middle of the valley, clay, sand and gravel create a soil favored by narrow leaf yucca, juniper trees, barberry sagebrush, greasewood, white sage, shadscale and four-winged saltbush. Rabbit brush grows in areas along the roadsides and walkways.

As visitors walk the trails, they can look for dark, bumpy patches around rocks and other plants. This is Cryptobiotic soil. This desert glue is alive with lichens, mosses, algae, microfungi and bacteria. Cryptobiotic soil crusts help stabilize the soil by reducing wind and water erosion. These microcosms are fragile, easily damaged if disturbed and can take 100 years to recover from damage.

During a stay, visitors should also be on the lookout for black-tailed jackrabbits, cottontails, packrats, kangaroo rats, mice and gophers.

Animals with more nocturnal habits, like mule deer, coyotes, kit foxes and skunks may be seen in the evening or early morning hours, but later in the day their tracks may be discovered in the sand. Several species of non-poisonous lizards and snakes are abundant spring through fall and you may even spot a rattlesnake.

Birds are plentiful and it is common to see ravens, kestrels, robins, sapsuckers, flycatchers and sparrows around the park. You may even catch a glimpse of Nevada's state bird, the Mountain Bluebird, a red-tailed hawk or a golden eagle.

At 4,800 feet in elevation, the area is typically arid with hot summers and cold winters. Summer temperatures range from 95˚F at mid-day to 55˚F at night. Rainfall is variable.